Stephen King is a master of horror, having a heavy name in both book and film. He doesn’t always directly write/direct films, he rarely does in fact, but a lot of the films based on his work seem to hit the mark. Obviously, they’re not all winners, but there are a large number of films based on his work that are seen as classics. Carrie, The Shining, Pet Sematary, just to name a few. Today I’ll be discussing an adaptation of his more recent (but not most recent) horror novel Cell, the script for which was written by King and Adam Alleca (2009’s The Last House on the Left). Does his direct involvement bring this above the other King adaptations? Let’s take a look. 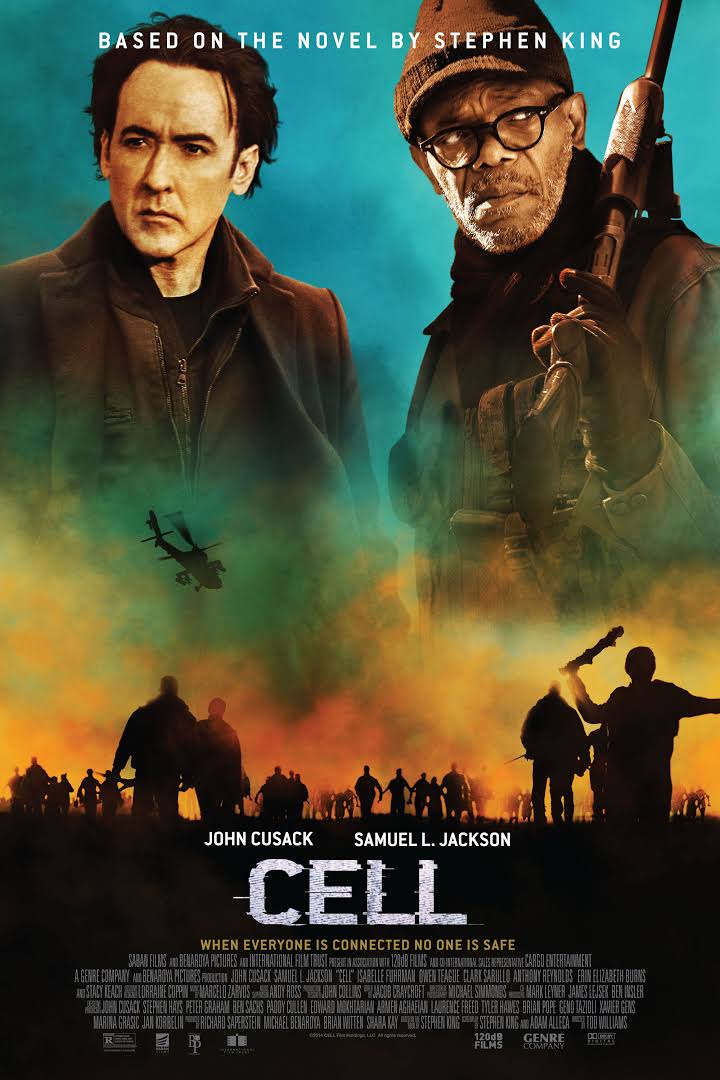 On a seemingly-normal afternoon, artist Clay Riddell (John Cusack) finds himself in the middle of a zombie outbreak, but not just any zombie outbreak. People are becoming infected by a signal sent through their cellphones. If you’re on your phone, you die. Well, your mind dies, but your body continues to feed on the living, zombie style. Clay teams up with strangers Tom (Samuel L. Jackson) and Alice (Isabelle Fuhrman) to survive the attack and find his family.

The only real point of praise here is the cast. Everyone in this film is given lame characters, let’s just make that clear right away. But the reason that these characters aren’t totally lifeless is because the leads are given to John Cusack and Samuel L. Jackson, actors who know how to take flat characters and breathe some life and personality into them. John Cusack’s career hasn’t exactly gone in the best direction, but he still remains a good actor, don’t let that recent resume fool you. He’s still charismatic and likable, which helps this movie quite a bit. Does it help the movie enough? I’ll get into that later, but he does bring something to it. Same with Samuel L. Jackson, who is playing a much more low key character in this film. We’re so used to loud, “mother fuckin” Sam Jackson that we forget that the guy has range. He gives a very quiet, real performance here that brought way more life to that character than the script even attempts to. It’s sad that he wastes a great performance in a movie like this, but it’s a great performance nonetheless. Him and Cusack bring some much-needed life to the film. Even Isabelle Fuhrman is okay here. She’s not great, but she has charisma. She hasn’t really been in a lot of films, which is a shame because I’ve always liked her, but she has potential. She has charisma and personality, which is what was needed with her role in this, but she really needs a great director and a great script to finally bring her to the next tier of her career.

The only other point of praise that I have with this film is pretty faint, but I want to give credit where credit is due. When the movie hits the 30-minute mark, there’s a 20-minute chunk that is actually pretty interesting. It never goes anywhere great, but there’s 20-minutes of this film that is very entertaining post-apocalyptic wasteland survival. But it’s only that 20-minute chunk. It may only be 20-minutes of a 98-minute movie, but hey it’s something. It has some fun banter, interesting ideas and some tense action. It gave me hope….but that hope was broken…..

As far as issues go, let’s start out with the script by King and Alleca. This isn’t a horrible script, up until the ending (but I’ll touch on that later). The issue is that it’s a script that’s just kind of flat and bland. There’s really nothing special about it at all. The story has some interesting ideas here and there, but none of it ever amounts to anything. Sure some of the ideas are cool, but the script doesn’t do anything interesting with those ideas, which results in a script with plenty of potential but no payoff. Not only is the story bland, but the characters are incredibly flat. The cast gives it their all, but they can only do so much. They can’t save what’s written in the script. I’m not even saying that I need all of these characters to have long, complex backgrounds, but I need them to be likable. The only reason they’re likable is because I like the actors. I could’ve given two shits about any of these characters. I needed something, but instead what I was given was boring characters wandering through the wasteland of a boring story.

Something else that bothered me was just how cheap this film looks. This film was obviously something put together on a shoestring budget, which I don’t mind. I don’t care about films having low budgets, there are PLENTY of brilliant movies with no budget. The problem is what you do with that low budget. I don’t mind bad sets and shit CGI, as long as there’s that script to back it up, which there isn’t. Because of this, I couldn’t help but constantly notice the amateurish approach to the direction and look of the film. This is directed by Tod Williams, director of Paranormal Activity 2, so he’s someone that is very familiar with low budgets. At least Paranormal Activity has a gimmick, this has nothing. The sets look awful, the CGI is awful, but all of that aside; the camera work is fucking terrible. Constant hand-held shaky cam and awful use of darkening images to try to get around their bad special FX, but these tricks are SO OBVIOUS that it highlights the cheapness more than anything. Normal conversations  have to be shot from weird angles and with weird camera movements, making it seem like Williams has no idea what he’s doing. I won’t say that he’s an awful director though, he’s got a very small resume so maybe he just needs to find his footing, but with this film he hasn’t. If this film didn’t have Stephen King’s name on it, you’d think that it was just any other straight-to-DVD horror film, made very apparent by not only the bad writing but also the cheap look.

This film also commits the greatest crime of any film, a crime that I’ve mentioned in plenty of my reviews, which is that the film is boring. No, it’s not boring. It’s BOOOOOOOOOOOOOOOOOOOORING. The first act is dreadfully lame, then you hit that 20-minutes of entertaining shit that makes it seem like that the film has found it’s footing, but no. Everything after that 20-minutes is fucking dull. Very rarely do I fall asleep while watching a movie, but this one almost made me pass out. My head was resting on my hand the entire time. It’s a slow decline in boredom, but I was holding out hope that maybe the ending would be at least interesting, but then I forgot that this was written by Stephen King. I’m not saying that King always writes shitty endings, but he has written some questionable ones. I haven’t read the book Cell but apparently the ending in this film is different, better or worse I don’t know, but it’s a finale that is absolutely abysmal. It’s the cheapest looking sequence of the film, you can barely even see what’s happening. I won’t spoil anything, but I was completely baffled by the ending. It was absolutely fucking dumb and honestly made no fucking sense to me. There’s this whole plot point surrounding a kid in a red hoodie that made absolutely no sense, leading up to a showdown that had me screaming a resounding, cartoonish “W-W-W-WWWWHAAAT!?!?!?!?” at my computer screen.

I really tried to like this movie, I’ve been looking forward to it for some time now. To be honest, I didn’t even realize that it had been released until I accidentally found it under the New Rentals tab of my VOD service. I feel like I’m the only one who has even seen this, which is for the best. This isn’t one of the worst movies I’ve ever seen, but wow is it forgettable. This is such a waste of your time and money. Hell, even if you don’t pay to see it, it’s still just a waste of your time. The cast is fine and there are cool moments here and there, but as a whole this movie is a cheap, dull mess that leads up to a finale that is beyond stupid. Even fans of Stephen King should pass this up, even if you’re curious. This isn’t a great Stephen King adaptation, it is just another shitty, cheap straight-to-DVD horror film that you wouldn’t even consider watching if it weren’t for that Stephen King name on it. You’re much better off watching the 2007 film The Signal. Similar story, faaaaar better execution.

(WARNING: this trailer is much more entertaining and interesting than the film itself)

About Mike Annerino 28 Articles
Horror has always kind of loomed over me without becoming a big influence on my life until a few years ago. I sort of always accidentally fell into a horror film-viewing experience, at parties or friends houses and such, but I always had this secret love with fear, found something fun and fascinating about it. These past few years I’ve been playing catch up and discovering everything I’ve missed in horror, a genre that is constantly being inventive and fun to watch. The embodiment of nightmares, which gives way for infinite possibilities. It’s easily become my favorite genre

‘Spiral: From the Book of Saw’ Review (Spoiler Free)