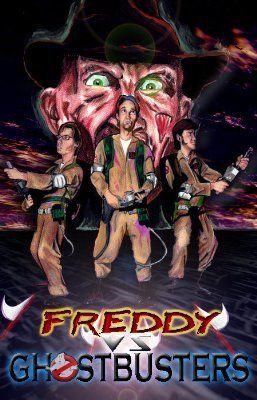 After the massive success of the incredibly well put together Friday the 13th fan film Never Hike Alone, I got to thinking about other fan films I’ve enjoyed over the years. Although I’m not sure why I didn’t remember it earlier, all of a sudden I was reminded about the 2004 fan film Freddy vs Ghostbusters. I don’t remember exactly how I watched it the first time many years ago (I’m assuming it was a con purchase), I decided to see if I could revisit this classic. Luckily for me I found the film in its entirety on YouTube (link below).

As is obvious from the title, this short film (34 minutes) pits the Springwood slasher, Freddy Krueger, against a new team of Ghostbusters.

The nightmare is always the same: dirty brown hat, striped sweater, and a glove of razors. Neil is having a lot of trouble sleeping lately, and the terrors are getting worse. Fortunately, help soon arrives in the the form of an old friend, Ed Spengler–nephew of Ghostbuster great Egon Spengler. With the help of their friend Eugene, Ed and Neil establish a Denver division of the Ghostbusters. Before long business is booming, but eventually they know they will have to face off against Freddy Krueger himself.

Those of us who have spent considerable time watching horror fan films know that the quality of these films can be all over the board. The good news is, Freddy vs Ghostbusters is one of the best ones. The creators of this film were able to masterfully capture the frightening spirit of a traditional Freddy flick with the well placed comedic aspects of the original Ghostbusters movies. The dialogue is well written, and while they’re are plenty of funny Freddy one liners, they don’t seem to be as cheesy as some of the ones found in the Nightmare on Elm Street series. J. Michael Weiss, Tim Johnson, and Jason Cook do a great job of portraying a more contemporary Ghostbusters team, both by paying tribute to the originals and adding their own special flare.

The same could be said of the way Bradley J. Roddy portrayed Freddy Krueger. I was glad to see that Roddy’s performance of the iconic slasher wasn’t something to be embarrassed by. It is obvious that Roddy is a fan of the series and has studied the way Robert Englund has played Freddy. Freddy looked great, sounded great, and Roddy’s performance is a big part of the reason why Freddy vs Ghostbusters should be near the top of the list of horror fan films.

An impressive thing for me was the authenticity of the Ghostbusters gadgets. Faithful to the originals, the equipment didn’t look like shoddy cardboard and tape. Closely related to this was the above average use of digital effects in a low budget fan film. The Slimer cameo was well done, and the proton beams coming from the proton gun looked great. While not over the top with gore, the practical effects used in the various Freddy kills were satisfactory, not looking laughably cheap or weak.

The real standout with this movie, though, is the story itself. Sometimes when movie crossovers happen, they happen in such a way that seems forced or doesn’t make any sense. Such is not the case with Freddy vs Ghostbusters. The execution of the plot is superb, and the match-up between the two cinema giants was just as fun as you’d hope it’d be. I won’t spoil the winner, you’ll have to just watch it for yourself to see who comes out on top.

The Second Remake of A Nightmare on Elm Street