The preternatural phenomenon of so-called “demonic possession” has been a fixture in the cosmos dating back centuries. One can find traces of this activity happening in countless religious cultures, and in the pages of the holy books of today’s major world religions. The idea of the demonic possession has evolved over the years. Earliest reports of it can be found with the ancient Sumerians (earliest civilization in Mesopotamia, circa 3300 BC), who held the belief that illness was cause by the inhabitation of “sickness demons.”  While the details concerning each individual doctrine may be different, the idea of an unholy, evil spirit dwelling inside the body of a person, influencing the carrier’s behavior and attitude, is at the core of all these beliefs. 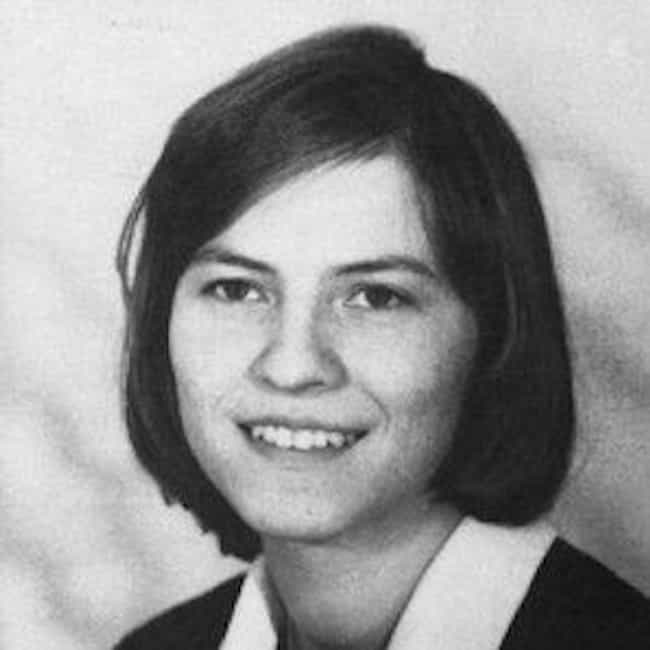 The belief that these malignant spirits can be expelled from the infected, with the aid of some benevolent deity, is just as old as demonic possession itself. This process, called exorcism, can also be seen in the major religions of the world today. The expelling of the demon can be accomplished with a binding oath, a ritual or rite, or simple prayer. It would appear that the necessity and frequency of the Roman Catholic Rite of Exorcism has not dwindled, as just this year the Vatican held a week long “exorcism training course” for 250 priests from around the world.

The Rite of Exorcism has certainly found its way into popular culture, through the medium of the horror film. Recent blockbusters in the Conjuring cinematic universe rely heavily on the exorcism. These films detail the true cases of famed demonologists Ed and Lorraine Warren (Ed Warren was the only lay exorcist official recognized by Rome). The most well-known of the possession films is undoubtedly the 1973 classic, The Exorcist. That film helped spawn the plethora of demon-infesting cinema we have today. The idea of an exorcism has always been controversial, and 2005’s The Exorcism of Emily Rose documents perhaps the most controversial case of demonic possession/exorcism in contemporary history: the exorcism of Analiese Michel.

The Possession of Analiese Michel

Anna Elisabeth Michel was born on the 21st day of September, 1952, in the village of Leiblfing, located in Bavaria, Germany. Her parents, Josef and Anna, were devout Roman Catholics, and brought Analiese up in a strict, religious home. Along with her siblings, Analises attended mass at least twice a week, and found herself to be very religious. Her early childhood seemed to be nothing extraordinary, but she would soon experience events that changed the course of her life for good.

In 1968, at the age of 16, Analiese suffered a serious convulsion and was diagnosed with temporal lobe epilepsy. Her mental state seemed to worsen following that year, and she ended up in a psychiatric hospital. In June of 1970, while at the psychiatric hospital, Michel suffered another seizure which prompted her doctors to put her on the anti-convulsion medicine Dilantin.

The new medicine did not stop the torment Analiese says she experienced. Along with seeing devil faces, she was plagued with disembodied voices telling her she was “damned,” or that she would “rot in hell.” Over a period of five years her condition worsened, as the various anti-seizure and anti-psychotic medicines worked to no avail. She began suffering stronger delusions and depression, and developed an aversion to religious paraphernalia. When repeated attempts to help her by traditional pharmacological and medical means failed, Michel (and later her family) became convinced she had, in fact, been possessed by the devil.

The Exorcism(s) of Analiese Michel

Analiese and her family began trying to get the approval for exorcism. The Church does not authorize the use of the rite on a whim. According to the Vatican, “the person who claims to be possessed must be evaluated by doctors to rule out a mental or physical illness.” Some of the signs, according to the Church, of demonic possession are:

The young girl had exhibited these signs, and more. She started eating insects, and even drinking her own urine. Still, the Church was not convinced, and their request for exorcism was denied. She was prescribed more anti-convulsion drugs, but nothing seemed to help. Analiese’s condition only worsened.

Finally, Father Ernst Alt (who had known the family), came to believe that 23 year old Analiese Michel was possessed by demons. Alt was finally able to convince Bishop Josef Stangl to authorize the rite of exorcism, under the rule of total secrecy. The poor young woman began what would be a series of 67 exorcisms lasting from 1975-1976. The events themselves lasted sometimes up to four hours, and she received one or two per week. During these exorcisms, Analiese claimed to be possessed by six demons, among them Hitler, Cain, and Lucifer.

On the first day of July, 1976, Analiese Michel passed away at her home. After a grueling life plagued with depression and torment, Analiese suffered no more. The official cause of death was listed as malnutrition and dehydration, as Michel refused to eat or drink in the months leading to her demise. She weighed only 68 pounds.

In the months preceding Analies’s death, the investigation led to the arrest of her parents, as well as Father Alt. After 11 months of testimony, including a multitude of actual recordings taken during the exorcisms, all three were found guilty of manslaughter due to negligence. Their sentences were light, each getting a (suspended) sentence of 6 months in jail and 3 years of probation.

Nearly two years after her burial, Josef and Anna requested to have their daughters’ remains transferred from the cheap coffin in which she was hastily buried, to a new oak coffin lined with tin. It is rumored that they were acting on the vision from a nun, who had mentioned seeing her intact body as a sign that she was free of demonic entities. 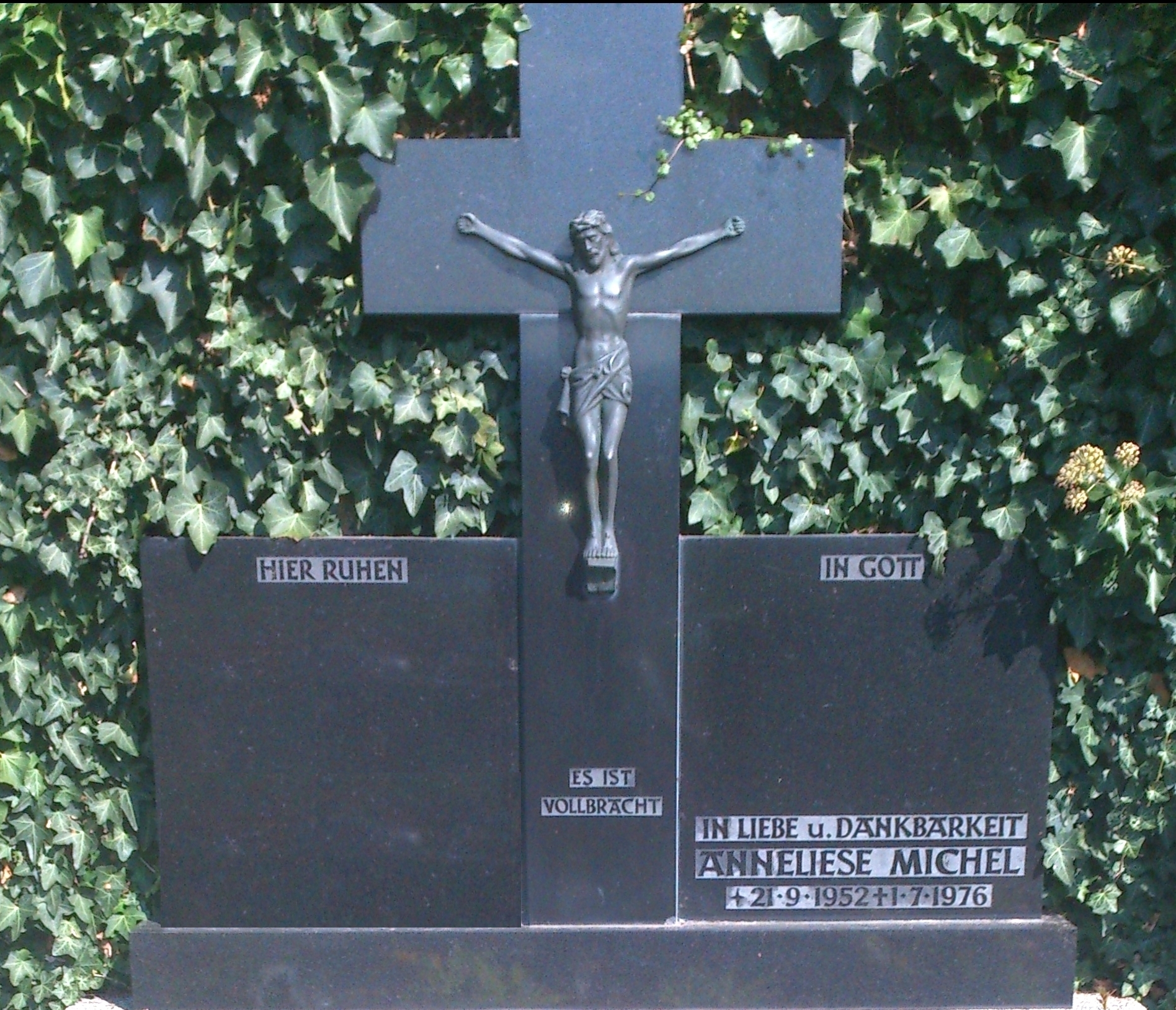 The story of Analiese Michel can be seen as a microcosm of the supposed battle between science and faith. The argument is often presented that faith and science are mutually exclusive, you can only have one or the other. Perhaps it isn’t as black and white as that. For years the scientific medical treatment Analiese received did nothing to improve her condition, and the many exorcisms she experienced produced the same result. In a case like this, it is obvious that neither traditional medicine nor religious rite caused Analiese’s torment to cease. Instead of arrogantly ignoring what the other side has to offer, maybe the paradigm of the false dichotomy between religious belief and scientific inquiry needs to be destroyed, erecting in it’s a place a worldview that recognizes how harmoniously these two elements can exist with each other.

Today, many hail Analiese Michel as an unofficial saint. Her gravesite has become the destination of many a religious pilgrimage.

The following contains some of the audio of Analiese during her exorcisms that was played for the court. This audio content may be disturbing for some listeners.