I recently made a purchase I had been waiting a long time to make. That was Richard Mogg’s book Analog Nightmares. This book is a retrospective/review collection of some shot-on-video horror movies from 1982-1995. There’s over 200 films talked about in this book. Obviously, the goal in reading the book is to somehow watch the films that are of interest to me. To this point I haven’t seen a ton of shot-on-video horror, but I absolutely love the style and am looking forward to watching more. In doing so, I decided to write a post with my current 5 favorite SOV movies, and then months down the line when I am finished reading the book and have watched a bunch more, I will do an updated list. So without further ado, here goes. 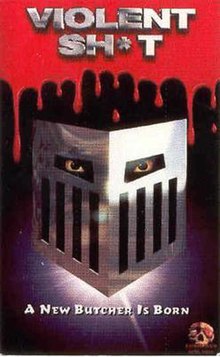 In 1989 German filmmaker Andreas Schnaas gave us a gift with his insanely gory SOV slasher Violent Shit. The story follows a killer called Karl The Butcher Shitter who escapes from police custody to kill people in many violent ways. It won’t win any awards, but this gorefest is an absolute blast for me. Other people have enjoyed it as well, as it has spawned a few sequels and a remake. Violent Shit was my introduction to German splatter, and its one I go back to time and time again.

I watched this gem after a horror friend of mine made the suggestion. And I am glad he did. Sledgehammer is the epitome of SOV horror from the 80’s. The story follows a young boy who sees his mama hooking up with some random stranger, and he decides to bludgeon them to death. Ten years later, a group of teens visit the cabin and decide to conjure up the dead couple, but instead the sledgehammer wielding madman comes back. Buckets of blood and oddly effective slow-mo shots make this one memorable slasher. Required viewing.

As can be seen by the poster, 1985’s Blood Cult was purported to be the first movie made specifically for the home video market. Because of that, the film has achieved legendary status. The story follows an aged sheriff investigating a series of brutal murders taking place on a college campus. The murders are being committed by a cult who are conducting blood rituals. Without much of a budget and with sub-par acting I still love the charm of this old film. I haven’t seen the sequel yet, but fully intend to at some point.

Growing up I was always a huge fan of Troma. They released this hilariously entertaining SOV zombie movie. I love just about everything about Redneck Zombies. The story follows a zombie outbreak started by a barrel of radioactive waste being mixed in with some rednecks’ moonshine stills. A great story, hilarious dialogue, and violent cannibalism combine to make this one of my favorites of the 80’s. If you’re a fan of Troma and zombies, you have no excused not watch this one.

The Burning Moon is brought to us by legendary German splatter director Olaf Ittenbach. This movie tells the story of an older brother telling his little sister bedtime stories. Unfortunately for her, the stories are filled with unrelenting brutality and violence. The real star in this film are the special effects. Ittenbach is known for his high quality gore, all on full display here. This film is more than satisfying for gorehounds like me.